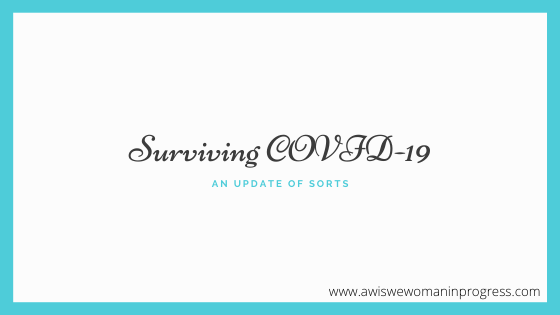 It is May. We are officially into the one millionth month of the year 2020. The last post I wrote was jam packed with goals and optimism. My how things can change in a blink of eye. Not long after I hit submit on that post and shared it out across all things social media the world literally changed as we know it.

I had this idea that I would try to write through how things were going as we adjusted to our version of the new normal. Stay home orders, masks, extra-hand washing, adjusting to social distancing and learning to function in an almost entirely digital world. What actually happened was that I went through every single stage of grief. Mostly this was in response to me not having the opportunity to make the trips and see the people I had been really looking forward to seeing since we left Texas and moved to New Mexico.

I think I rode the first several stages together in a very big wave of depression, anger, shock, and denial. I only somewhat experienced the bargaining because truthfully I knew it wouldn’t matter. So for the second half of March I was a giant mess of barely functioning emotion. I cried at least once everyday and probably managed to run off every friend I had in the process. I’ll be honest even I was getting sick of myself and the constant whining and complaining. Which is probably why by the beginning of April I had hit the testing and acceptance stages. I began to search for outlets and focused on ways to better myself.

And now here we are. We are through the first full week of May and maybe in some places at least things are starting to look up. The month of April brought a lot of growth for me personally. I, for the first time in forever, took the time to focus on myself. I worked on evaluating the foods I was eating and I set fitness goals. The best part of these fitness goals is that I actually stuck to them for the most part. I decided that if I wasn’t going to get to see the people I was looking forward to seeing for the better part of a year or more then I was going to make sure I was truly the best version of myself when I get to see them again.

In January Dusty and I began working through the Diamond Dallas Paige Yoga (known as DDPY) program together. We got lax and lazy with it so when we went on lock down we made the decision to restart the program. We are now at the end of week 7 and this time we are going strong. As much as I enjoy the DDPY I had to admit that I wasn’t loving it. Then one day when scrolling Facebook I came across a sponsored add for 30 days free for a program called Refit Revolution. I knew of this team of women from some of the videos they posted on YouTube but as I did more research based on a free trial I decided it was too good to pass up. The best way I can describe Refit Revolution is “Zumba without all the twerking and gyrating.” I am now in the middle of my second month using their ‘on demand’ platform where I get access to live classes during their live schedule as well as access to archived classes when the live sessions don’t fit with my schedule.  I am hooked and will probably become a paying subscriber for life. The uplifting, encouraging, all inclusive atmosphere is just addicting. Truthfully I look forward to the day I can visit Waco and join in on a live class one day. But until then I will dance like no one (except my kids) is watching in my livingroom.

We have also worked on planting our own veggies. I tried growing some herbs and things in Fort Worth and failed miserably. I often tell people that the only reason I keep kids alive is because they are noisy and remind me they need to eat often. Plants don’t really do that. Luckily, the same kids that remind me to feed them remind me to water the garden as well so that has been helpful. If you happen to be my friend on Facebook I usually do a live video a couple times a week to share the progress on our garden. I also take some time to ramble there about the thoughts bouncing around in my head so that has been fun…sorta.

And lastly we officially made the decision to home school year round. We finished up our study of Creation to the Greeks and instead of starting summer break now we took a week off for me to regroup and get my feet under me then this week we jumped right into our new study of Rome to the Reformation. As things begin to work toward whatever our new normal of traveling and play dates and activities look like we will decide when exactly we will be taking a longer more relaxing break. I am hoping to spend more time highlighting our school progress starting next week.

So there it is. Where I have been (ya know..at home like everyone else) for the last month and a half. Processing, thinking, attempting to accept the new normal that we all now live in. I have worked to evaluate who I am and how I can use this little corner of the internet to be useful and in truth I don’t know the answer to that just yet. I know I don’t want to be someone that just rambles for the sake of rambling so hopefully in time I will come to know what my purpose for writing really is. Maybe that subscription to  Masterclass.com we just signed up for will help me along the way. Until then, if there is anything you, whoever has managed to make it this far into the abyss, would like to read that I might be able to share please let me know. Maybe it’s a recipe or way of cooking, maybe it’s some form of household management, or maybe it has to do with how to get an almost 10 year old to get through their daily lessons without a fight (spoiler..I have no idea). Whatever it is, let me know. I want to be here for you. I want to open my life to you and share the tools I have in my tool belt.

Almost half way through this and I've been chipping away since 2022. Can't bring myself to remove it from mu Goodreads "Currently Reading" just yet.
Finally digging into December's @bookofthemonth book and yet again I am dot disappointed.
First 3 books of the year complete. This was such a good series! Highly recommend.
My @bookofthemonth club book has arrived!
First library day of 2023. Spending the afternoon curled up in our comfy spaces reading.
First day of school for Mars Hall Legacy Academy is in the books. Here's to a successful 2023.

living with less gave me more to live for

There are things that you are good at! Explore and live it...