It’s not hard to notice that we live in a very me-centric society. All you have to do is turn on the TV, log on to any social media site, or stand in line at the grocery store to be bombarded with advertisements, pictures, and products that are designed to help people look out for “# 1”

“Looking out for #1” That is a phrase I have heard often in my life from various people. They say Dthings like, “I gotta do whats best for me. I am always looking out for # 1” They say this as if they are truly the most important person to ever walk the face of planet Earth.

While I will admit we do need to look out for our best interests and do the things that will keep us healthy, safe, and cared for, the woman we have been discussion for the past several posts shows us that if we are really going to be “looking out for # 1” we have to learn to put others first.

The Proverbs 31 would probably never be found on a list of people who would be classified as “selfish” In fact, most, in today’s society, would say that she was just too giving and didn’t take any ‘me’ time for herself. And that might be true. But what does the term Unselfish even really mean?
To define unselfish first we have to establish what fits into the mold of being “selfish”

Selfish can be defined as someone who is so wrapped up in their own welfare and interests that the welfare and circumstances of the people around them simply don’t matter.

It would stand to reason, then, that the quality of being unselfish would be the opposite of selfish. A person who is unselfish could be considered a person who makes the choice to put the welfare, happiness, and needs of others before their own.

We have already seen as we have looked as several of the other verses in this 21 verse passage that the welfare and needs of this woman’s family~those persons who live in her home~as well as the individuals who are employed in her home are cared for. Their welfare and interests are made a priority. But what we see here is that this woman is not so consumed by her own plans, projects, and affairs that she doesn’t have time to help out others who cross her path.

In the post on being Economical we saw that her lamp never goes out at night. This wasn’t because she was hard at work at all hours of the day and night. It was because she, along with her husband, wanted others in their neighborhood to know they were available. They had resources to share and they were ready and willing to be of service where ever they would have been needed. She also wasn’t afraid to offer her help when she saw a need.

How to be Unselfish in our ‘me-centric’ society

How many times has a post on social media, or a prayer request in the church bulletin, or a random comment from a friend come across your path and you thought to yourself: “Hey, I could probably help with that.” But then you keep scrolling, toss the bulletin in the trash, or change the subject in the conversation because really, if you thought hard about it, you didn’t really want to get involved anyway? I know for me, that has happened more than I like to admit. But what makes us respond in that manner rather than taking a page out of the Proverbs 31 woman’s book and extending our hand to the needy?
Pride, that’s what makes us respond this way.
Proverbs 16: 18 reminds us that

Pride goes before destruction and an haugty spirit before a fall.

Our pride gets in the way and we think “I don’t have time for that.” or “If they really needed help they would come ask directly instead of posting this on social media just looking for sympathy.”

So how do we get past that and learn to extend our hand?

Scripture is full of examples of unselfish individuals as well as those who fall on the other side of the coin. If we turn again to Proverbs we see in chapter 16 verse 17 that Who ever is generous to the poor lends to the Lord, and he will repay him for his deed. You see, if we are going to be the hands and feet of Jesus then we have to learn to put the “me” away and start focusing on the people that God has placed in our path. Jesus, the ultimate example of unselfishness, said in Matthew 25:40 that “whatever you do to the least of these, you also do to me.”  The best way to begin to transition from a life of  ‘selfishness’ to a life of ‘unselfishness’ is to filter our decisions through this prayer: 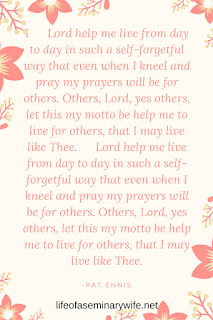 Where do you fall on the “selfish” scale? Do you have an attitude of open handedness or do you keep your hands closed tight? How can you work to become less selfish? Join me next time when we learn about the principle of being prepared.

9 thoughts on “The Principle of Being Unselfish.”

Almost half way through this and I've been chipping away since 2022. Can't bring myself to remove it from mu Goodreads "Currently Reading" just yet.
Finally digging into December's @bookofthemonth book and yet again I am dot disappointed.
First 3 books of the year complete. This was such a good series! Highly recommend.
My @bookofthemonth club book has arrived!
First library day of 2023. Spending the afternoon curled up in our comfy spaces reading.
First day of school for Mars Hall Legacy Academy is in the books. Here's to a successful 2023.

living with less gave me more to live for

There are things that you are good at! Explore and live it...