2 weeks ago the kids had a somewhat rough time when it came to behaving during church. One was blatantly defiant to his teacher during the entire class causing a need for Dad to come in and intervene and the other had a few moments of rude interruptions while her teacher was trying to talk which lead to the need to go get Dad (who was preoccupied with brother) to intervene. Luckily, just the act of the teacher walking out of the class was enough to scare her into submission for the rest of the class time. Mom was busy teaching her own class and was of NO help what-so-ever during this particular hour.

During that time Dad was in charge of making the discipline decisions. One of the decisions that was made was that both kids would be grounded from watching any form of Television for the week. This included Netflix and Hulu (the only “cable” type watching we have access too), movies, and videos on YouTube. (Yes, folks. YouTube has been discovered by the littles in the house. The current favorite is toy reviews and stop motion animation using the very same toys played with at home.) However, Mom and Dad had a show we were both looking forward to watching that very evening. The solution was to unplug the TV and bring it upstairs to our bedroom where we connected it to the computer to watch said program.

This little plan of ours worked just fine for the moment but it quickly became in the way in our bedroom and needed to go back downstairs to its home. We left it unplugged because with the kids being grounded from watching there was little need for it. Neither of the grown ups in the house really have time for much watching and what I do watch is usually done on the laptop while I am cleaning or folding laundry.

We are now 1.5 weeks into the television set being unplugged and I have to say that there are a few things that I have learned while having it out of commission.

Morning routines are so much easier when the TV is off!
I am really bad about sticking to a routine in the mornings. There was a time when I was a super morning person. I have a former teacher that can vouch for my unnecessary early morning peppiness. However, I have now become a full time mom and a full time student. Me and sleep are good friends. We need to spend LOTS of time together to keep our relationship alive. Therefore, when I have to leave sleep behind in the mornings it makes things tough to say the least. I am finding that when I don’t automatically move toward the TV first thing in the morning both the kids get dressed, have breakfast, brush hair and teeth, etc. all in a semi decent time frame with little to no fighting or fussing.

The kids play outside more.
The fact that the kids are dressed and fed in a decent time frame means that they have the opportunity to go outside and play before it gets to hot to be out in the Texas summer heat. (I know its September but its still topping out in the upper 90;s Thats HOT!) They get to run and burn that energy early on and I get a chance to straighten up the downstairs with out having little ones yelling at me that they can’t see every 5 minutes. That annoyed me when I was 15 and it annoys me now.

School time goes MUCH smoother.
We are full swing into our first official year of homeschooling (one in Kinder and one in Pre-K). The lessons are relatively short and simple to get through so we are done quickly but when the TV was on I heard A LOT of ‘just one more show mom! Please!!!” And more often than not I would give in so I could get one more thing ready or clean one more room in the house. Before I knew it the clock was telling me it was time to start getting ready for lunch and I would have to rush to get school and lunch done at the same time.
That meant the learning was subpar and the lunch was worse.

Books are being read more!
Today we spent nearly 4 hours at one of the public library locations in town. I made the decision to go to the central location because I just love it. The children’s section is wonderful and the kiddos love going there. I took some time to get the reading books needed for the next 2 weeks worth of school and each kid got to pick out a few books just for fun. Now with the TV off they are actually reading their books more. AND sometimes they even read them together without all the fighting. Its like a Christmas miracle I tell ya!

Meals happen at the table as a family.
This is one that I have tried for a long time to make sure happens. I enjoy spending time sitting around the table and talking with each other as a family. I like having that time to really get a chance to know what is going on in my kid’s little 3 and 5 yr old brains. I often find some of the most unique things come out of their mouths during meals. However, we had gotten into a BAD habit of watching TV while eating dinner. Each of us in our own corner. I wasn’t happy with it but I also didn’t want to deal with the fighting and whining that would come with the change. Now that we are on the road both kids come straight to the kitchen when I tell them it is time to eat. That goes for all 3 meals of the day now. We are eating together and talking to one another. It’s truly one of my favorite times of the day. 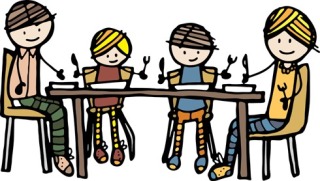 And lastly, bedtime routines are SO much easier.
Now that we aren’t staring at the TV during our meal times until it’s finally time to go to bed the process of getting the kids to bed has been so smooth. We tell them it’s time for bed and they just go. No more begging for another show or more video game time. Now they ask which one of us will be reading them a bed time story. Getting in their PJ’s and tucked in is a joy and a piece of cake. We are all able to end our day and pleasant as it began.
I will be the first one to tell you I didin’t like the idea of the TV being out of commission. I am counting down the days until some of my favorite shows come back from summer break And I am not saying that by us unplugging the television that all of our troubles have gone away. We still have bickering and arguing but now there is a lot less noise behind it. I am not saying that the TV will stay unplugged forever either, But then again, you might just see a “For Sale” sign taped to the screen and posted on Facebook some time soon as well.
Does your family watch TV? How much or how little? How do you regulate the amount of TV time gets used on a regular basis? Let me know in the comments!

1 thought on “Lessons Learned When We Unplugged The TV”

Excited to start a new project today!! #beadwork #craftymom #craftyandcreative #seedbeads #newproject
One of the recommendations from our @namb_sbc replanter assessment was to work to as more physical activity into our week. A suggestion was hiking in the mountains that surround our community. So today we did just that. It was fun taking @pastordusty and the kids to see a different view of the trestle. The kids were troopers. That hike was no joke. (It was a lot easier when I was in middle school!) #hiking #healthybody #healthymind #Godsgoodgifts #thereisnatureinnature #gonnabesosoretomorrow
Enjoying this quiet morning with tea, a book that is challenging me to my core on how I relate to my "out-of-the-box" children while one of those kiddos sits and reads his newest library acquisition next to me. #readingtime #leadersarereaders #different #teatime #myhappyplace #stolenmoments
Handsome husband at the grill.cooki. dinner, happy kids jumping on the trampoline, slight breeze blowing through and a new book to dig into. Not a bad way to end the day if you ask me. #londerdaysmakemehappy #readinggoals2021 #reading #timefordinner #handsomehubby @pastordusty
NAMB Send Network Replanters assessment retreat day 2. Let's do this. #replantingandrevitalization #namb #allthemeetings
I've been trying to get my hands on the final book in this series for over a year and FINALLY I was able to pick up a copy at the library on Tuesday. I began reading it on Wednesday and just finished it tonight. It was a beautiful wrap up to an exciting series. I HIGHLY recommend it! #readinggoals2021 #bookstagram #imaginariumgeographica #heretherebedragons

life with less gave me more to live for